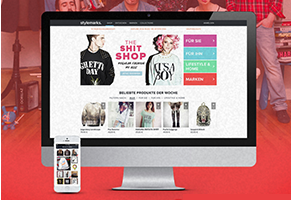 Berlin – The mobile marketplace for vintage fashion and design products, stylemarks, closes its first mid-level 6-digit financial round and wins Venista Ventures together with Familiy’s Venture Capital as investors. Further on hub:raum, the incubator of Deutsche Telekom, invests in the team around Oliver Bronner, Mark Linneweber, Stefan Decker and Andrey Bezyazychniy and offers them a long-range home after the eight-weeks accelerator program. “We\re really happy to have Venista Ventures, Family’s Venture Capital team around Max Thyssen and hub:raum on board. They will not only support us monetarily, but also strategically”, explains Oliver Bronner, CEO of stylemarks.

The new version of the Klash iPhone App comes along with a better interface and animated GIFs for cooler proofs and a better overall Klash experience. It is now easier than ever to create fun and daring content. The original version of the app went online last fall and received very good reviews from its user base, scoring 4.9 out of 5 stars so far on average on the Apple AppStore.

Additionally, the advisory board around Alexander Jahn, former Vice President Digital Media Bertelsmann, and Nikolas Woischnik, initiator of Tech Open Air Berlin, supports the team with know-how and their industry experience. Together with Woischnik, Oliver Bronner founded the local live-shopping platform Reduti in 2009 – and sold it one year later successfully to Daily Deal. “The idea of opening up the market for vintage design using mobile technology and creating a mobile platform for the design community greatly impressed us. And simply seeing how passionately the team members behind stylemarks are pursuing their idea made our choice an easy one”, enthuse Peter Borchers and Min-Kin Mak, the two heads of hub:raum.

The program enables the ideal setting for stylemarks to implement the product vision and prepare the iOS-app launch in march. stylemarks is a mobile marketplace where design products can be discovered, bought and sold easily and conveniently. stylemarks focuses on reinventing the buying experience by putting it into a new social context and connecting design lovers not just digitally but also emotionally. stylemarks is a marketplace but furthermore also a contact point for a community wishing to exchange information and seek inspiration – on the platform itself and via its social channels such as Facebook, Twitter and Pinterest.

stylemarks is a mobile marketplace where preloved items including vintage fashion, design, and furniture can be easily discovered, bought, and sold. The nine-man team is situated in the city of design