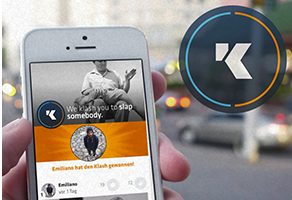 Berlin – The Berlin-based startup Klash today announced the release of a major update of its iOS application as well as its first round of funding in company history. Klash, the platform that lets people challenge and dare their friends for fun, honor and actual rewards, announced this news as it drives distribution of its product in 2013. The new version of the Klash iPhone App comes along with a better interface and animated GIFs for cooler proofs and a better overall Klash experience. It is now easier than ever to create fun and daring content. The original version of the app went online last fall and received very good reviews from its user base, scoring 4.9 out of 5 stars so far on average on the Apple AppStore.

“We strongly believe that we are not born for boring and that the world deserves to have more fun. Our application is a perfect tool to solve this problem”, said Alessandro Petrucciani, one of the Klash founders. The truly international team of five (Austria, Argentina, Germany, Italy and Turkey) have also successfully finalized talks with two investors from Germany. The lead role in this first funding round, the total amount of which remained undisclosed, goes to Cologne-based mobile investor Venista Ventures, whose COO Kai Schmude said: “In Klash we found a passionate and driven team with a great idea. We’re happy to get the chance to support them on their way to success.” Schmude further explained why Venista Ventures became a shareholder: “Klash is a new project full of potential that merits engagement because they are putting a lot of focus on interacting with their users specifically through mobile channels.” The second company to invest in Klash in this first funding round is Eierfabrik, also a Cologne-based investor.

“We will keep on improving our product but also focus on growing our user base to guarantee the best user experience. This is our ultimate goal”, explains Alex Napetschnig, who also belongs to the founding team of Klash. Their unusual but very effective guerilla advertising stunts, ranging from little “homemade” car-table-slide-action-videos to weekly Klash campaigns challenging the audience to pull down their pants, are contributing to a very strong brand that strictly follows the “not born for boring” identity.

So unless you are born for “boring”, what keeps you from becoming a Klash pioneer?

Klash is the platform to challenge and dare your friends on anything that’s fun! Built on top of Facebook, Klash makes every competition among friends more social and easy to engage with.